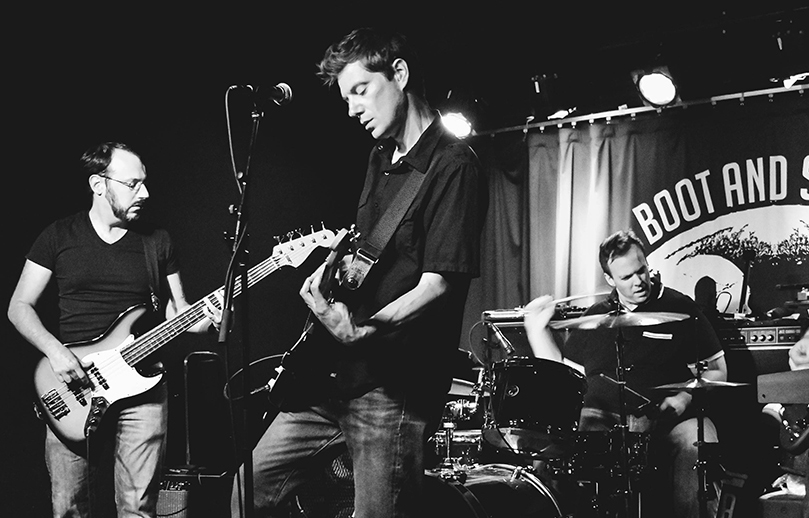 The Silence Kit is a Philadelphia-based post-punk band that plays textured, dark, indie rock. Started by singer/guitarist Patrick McCay, he was joined by Darren O'Toole on drums and Justin Dushkewich on bass in 2014. James Gross and Bryan Streitfeld joined in 2018. The band's latest LP "Fall Protection," blends the band's varied influences - post-punk, 90's alternative rock, neo-psychedelia, layered shoegaze, and melodic indie pop - even more thoroughly and more naturally than ever before. "Fall Protection" represents the many different corners of The Silence Kit's sound and yet somehow forms a very cohesive, linear experience altogether.

"Fall Protection" and it's jagged rhythms, economic arrangement, and noisily warped, brashly melodic songs are a statement of intent, from it's opening notes to it's shattered denouement. It's clearly the band's singular voice, fusing together the atmosphere and intensity of 1982-era post-punk and goth rock with the spirit of 1992-era indie rock.

"The Silence Kit doesn't sound like much else in Philadelphia... the artful arrangements, stark guitars and charismatic vocals recall Joy Division or The Cure... If I thought for a second that Nick Cave listened to new music (or read newspapers), I'd tell him to check out Watershed, the dashing new release by this moody, darkly groovy rock band. Surely he'd dig the way these Philly dudes do post-punk aggression and new wave pop drama..." - Patrick Rapa, The Philadelphia City Paper

"With a dark and ominous bass line and distorted guitars, the song hits the classic notes of post-punk before blending in a brass section that draws the song into brighter waters, if only for short bursts at a time. There's nothing to suggest that The Silence Kit was not a cult favorite in the 80s, their sound is so steeped in the moody, inverted psychedelia tones of Echo and the Bunnymen and The Cure." - WXPN, The Key

"...stark drums, quiet guitar and piano and McCay's understated, gentle croon/rasp leading into a brighter but no less intense second half, suddenly surging with energy worthy of prime Chameleons or The Sound." - Ned Raggett, Allmusic.com

"Classic post punk is what Philly's The Silence Kit present in generous and large doses, sometimes more dark than other gazers and often with a psychedelic backbone... Perfect for cold and dark nights." - The Blog That Celebrates Itself

"A great record. A moody thing with fire in its belly and a melodic heart lacerated by intriguing barbs." - Mick Mercer

"This record shakes the soul and not a small area of the solar plexus. That it does so while frequently maintaining a sonically melancholic profile, is not a little remarkable... the deep national voice, the synthy atmospherics, some poignantly bleak guitar hooks, the bass's throaty post-punk insistence and an exuberantly caged beat... Watershed is indeed an event worthy of its title." - Dave Cantrell, Stereo Embers Magazine

"There is no filler on this album, just tightly conceived songs that really use their instrumentation. The drum fills are varied and forceful, the guitars are flourishing and melodic, and the bass is driving and powerful. Shimmering beauty creates the wall of sound on this recording, and when the keyboard is laid into the tracks, it creates an atmospheric quality... The Silence Kit are one of those bands that you will grow to love..." - Shaun Haughey, Instrumental

"Then the true moment of magnificence comes five tracks in. ‘Am I Missing Something’ features a great rumbling intro, skyscraping guitar from the House Of Love songbook and an urgent performance from McCay..." - Leonard's Lair